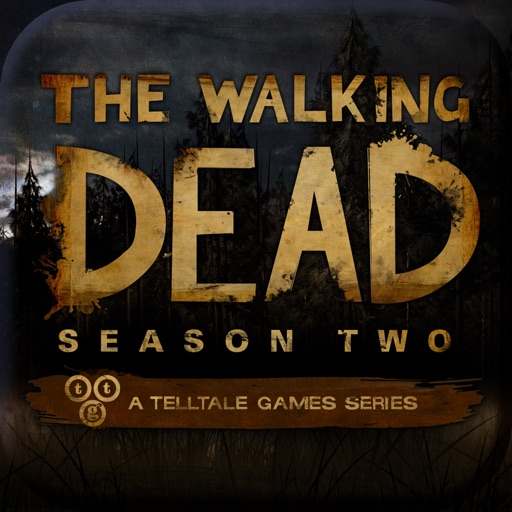 ***Save 25% on additional episodes in The Walking Dead: Season Two by purchasing the Multi-Pack [Episodes 2-5 bundle] via in-app in the 'Episodes' menu***

The sequel to Game of the Year award-winning series continues the story of Clementine, a young girl orphaned by the undead apocalypse. Left to fend for herself, she has been forced to learn how to survive in an unforgiving world. But what can an ordinary child do to stay alive when the living can be just as bad – and sometimes worse – than the dead?

Experience what it’s like to play as Clementine, meet new survivors, explore new locations and make gruesome decisions in this five-part game series of choice and consequence.

A twisted tale of survival spanning across 5 episodes (All five critically acclaimed episodes are now available):

Episode 1: All That Remains
Episode 2: A House Divided
Episode 3: In Harm’s Way
Episode 4: Amid the Ruins
Episode 5: No Going Back 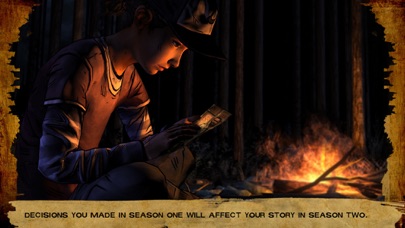 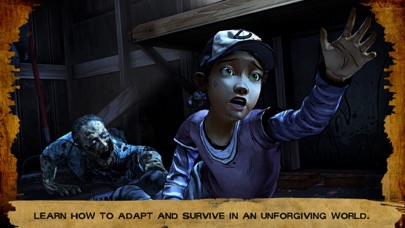 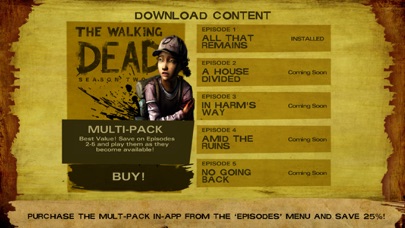 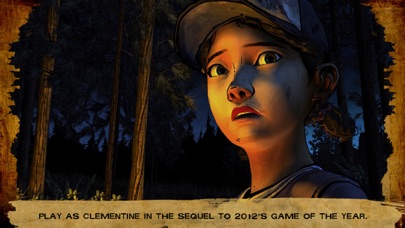 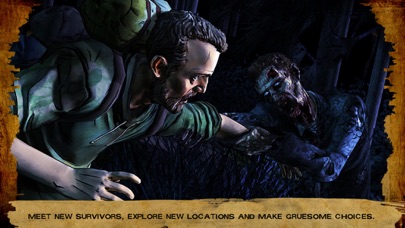 This is so sad by Veto99

Fix the choices and fix the sound. I cannot hear what the characters are saying to each other and then the dialogue choices are blank I paid for the chapter I just about want a refund. About to delete the game all together

This is for any The Walking Dead fan, as I shall say, this is the best interactive game I've ever played in months.

I love this game and it’s series and how it affects your gameplay from the decisions you make but ever since episode 2-5 I don’t get any options and says “This option is blank” and it’s annoying cause I don’t know what I’m saying.

no restore works by cloutjahdee

the restore doesn’t work AT ALL . my episodes did not load in or nothing. i could sue👎🏽.

I paid $15 for all the episodes and I’ve had this happen to me at least 5 times in episode 3. When it’s time to make a choice, all the choices say “This choice is blank.” For $15 this should not be happening.

So I downloaded it and my mom purchased it all for me and so I played it and wifi was bad at the time so I was not able to download it all at the same time. I was getting onto a new episode I didn’t have and it broke. I deleted it and then downloaded it so I wouldn’t have to deal with it. Then I had to used my MOM credit card and go back and purchase it all

I’m getting mad by reisherd

I’m on episode 2 and the game constantly comes up saying each choice is blank. The game is basically unplayable at this point and it’s obnoxious as I really loved the game when I could actually play it.

It’s a great game by Maknae_Kookie

Overall, this is a great game..I just wish we didn’t have to pay for episodes. I myself, can NOT pay for these episodes for reason, and I feel sad that I can’t play the rest of the episodes. If the episodes were free to download, I would feel happy. But it’s not my decision to make them free or not.

Comparing it to the Xbox and PC it’s pretty much the exact same the game. but there’s a couple music spots that are missing and a couple little glitches here and there. like in Clementine eyes do something weird at the rest stop at the beginning of the game in episode one... but put this aside. this is a really good game and has potential on the iOS Device thanks by telltale games. But Can you try to fix the flaws/glitches. Sincerely The game community. Thanks!!!

I...just can’t I love the games but that dog...plz change the codeing and make him find his mom.human mom and that girl...or I will I know hacking is illegal but i am a white hat hacker the good hacker and that may not be necessary but it is to me...just plz just I am crying fix it in 25 days or I will yet again white hat hacker and not you better do but add a option to save Otis he was going to be a dad just help me...when I was 4 I have seen a lot that was 4 years ago I saw...my dad divorce my mom...the grudge 4 but this...just....pls I can’t handle it just...please

LOVE this game but it has issues by DylantheSurgeon

I am hooked and I think that this game is 10X better than the first if you can believe. I only have one issue with it and it’s worth losing two stars. 50% of the game it shows all possible responses as ( this response is blank) it makes it hard to be involved in the story when there is a random choice instead of choosing what you would say. I found myself auto clicking a certain box every time because I didn’t know what I was clicking. If this could be patched I would be so grateful, I really want a chance to run through the story and get the whole experience. Regardless, thank you for making such an amazing game and I’m excited to play the next one

Episode 3 no choices by Pissedoff Patti

So far all choices are blank!

How to raise downloads by 10 times? by Cuma Rippingall

Looking for combine promotion games/apps, we can provide ASO service, daily installs can reach 3000+. Ping me at Skype:18226562962 . Every one can get a test promtoin fot 3 days now!

Can’t play the episodes I bought. by Ladybugvicious

The tile says it all... I bought the second and third episode and it’s not allowing me to download them for play. It will be nice if you would fix this issue or refund me my money.

Fix it please by areyougoingtohelpmeorno

I love this game but I am unable to download the episodes I purchased and nobody is able to help me resolve the issue. I would either like a refund or the issue to be fixed thank you

I love these walking dead games, but when I tried playing season 2 after the first episode it won’t let you download them. Also I already payed for all of them and now I can’t even play them so I don’t know how anyone would see this but I would like a refund. I payed for all 5 episodes.

Played the first episode and bought the bundle of 2-5 but it won’t let me down load them, keeps saying I have a network connection problem I tried on WiFi and using my data and still says the same thing

Can’t play the whole game! by Reminds me of cabelas things

No internet connection by Ericaaaa1219

Just spent $15 on episodes 2-5 and cannot download them. Tried switching wifi networks and still doesn’t work. Please fix or will get a refund.

I’ve played two other telltale games with no problem with episode downloads. I got this one to continue the walking dead franchise story, but for some reason every time I try to download any episode from 2 to 5 I get a notification saying there’s no network connection. This is super frustrating considering I’m on WiFi and data and it still won’t download. As well as me spending $14 to buy the bundle of all the episode. So I would love for this problem to get fixed, considering I basically wasted money on a bugged game.

This is ridiculous that I can’t download episodes 2-5 and just paid for it... fix it or I get a refund.

The app is having the same issue on my phone I bought all the episodes and it’s saying that I have no network connection I even have a new phone now. If the issue is still proceeding I would possibly like a refund. Thank you

Are you serious!?!?! by Bimini_Twist

I would love to say this is a great game but after I spent 15 dollars for the whole season, I attempt to download the other parts and it refuses to do so, telling me I’m not connected to the internet when I clearly am connected. I would have just contacted the developer instead of writing this review but there’s no contact information anywhere in the apple store or the game. How is there no “contact us” button in your game? I’d like my 15 dollars back if I can’t get any support to play the freakin game. Thank you.

I purchased episode 2 for this game and when I tried downloading the episode the game said I was not connected to network even tho I used my three WiFi networks and data. Every other app on my phone works fine w the WiFi and season 1 of this game worked okay but now season 2 won’t let me play episode 2? I need help because I just paid for an episode that I cannot play and I can’t refund my payment because it won’t let me restore my purchase. Also I deleted the game n downloaded it and now I cannot even find my file which was saved cuz I have my previous file from season 1. Please give me a refund or help me get the app working. I truly do like this game.

Cannot get episode 2-5 to download after purchase. I’ve restarted my iPhone 7 multiple times, connected to 2 different WiFi connections. Still every time I try to download any episodes it says network unavailable. Really want the game but would rather have my money back if it won’t work

The game was great but then:( by zippy309

All choices are left blank! by rheajjaja

Why are choices left blank in some situations? Please fix this. This is not fair. I payed 5$ for an episode and the choices are left blank? For what? Fix it right away.

Choice Is Blank by Mosskay18

Is the “Choice Is Blank” error ever going to be fixed? It’s been a few years & the error is still going on.

Played all of the seasons ! by Sabina010

This is a really great game I played it over and over again to see the choices.I recommend this 100% for anyone to play this.The game seems so realistic and I love it.

At the beginning by Avery Micael Newman

I love how this game is entertaining to me I love how it has action and have sentences you get to pick and tell you what is happening next I love it has the guy that dies in the beginning that helped the girl stay alive this game is the second best game after dead trigger which gives you characters whit different intelligence to beat levels which different characters.

why is this making you pay 15$ to buy the multipack? make it free, you cowards.

I love these games. But dont buy it because they wont update it at all. Most choices say. This choice is blank ! And you dont what youre choosing to say or do makes it pointless and frustrating. By the last chapter the charters dont even speak and its all just looking at each other and all choices are blank ?!?

Good game but.. by russiangirlykk

“The choice is blank!” by Carebearbaybeh

is becoming more frequent and taking all the fun out of an otherwise good game. Fix your glitches.

You get to play as Clementine and make some for the best choices ever!!!

Bugs this option is blank. by smcd030

How can you charge people for a game that has no fixes for this option is blank. You pay to have a story and it doesn’t even work. Why would you not come out with a fix? At least refund me my money. Most of episode 4 and all of 5 is not playable. Very disappointed after a good season 1.